How we navigate those conflicts is crucial.  Differences can be a source of antagonism and resentment, or, if approached in an intelligent way, they can be a source of trust and intimacy.  The ability to resolve conflict in relationships leads to a sense of security, knowing you can survive challenges and disagreements.

One thing that makes a conflict more than just a simple disagreement is that there is an emotional component.  A conflict is the tip of an iceberg of underlying, unconscious differences, and we tend to be emotionally attached to “being right” about them.  Exploring and exposing those differences provides a powerful avenue to personal — and relational — growth.  It leads to self-awareness and intimacy with others.

I find it useful to distinguish between two types of conflict: circular and synthetic.  A circular conflict goes around and around without coming to a resolution.  It is a chronic conflict, in which each participant seeks agreement that their interpretation of reality is the “correct” one.  What it boils down to is “I’m right and you’re wrong.” When two people both want to be right (or at least not be wrong) this becomes a prescription for stasis.  If you find yourself returning repeatedly to the same argument, you are probably caught up in a circular conflict.  There can be lots of action in a circular conflict, and lots of strong emotion, but all the sparks distract from the fact that the conflict is not going anywhere.

A synthetic conflict is one in which participants engage each other with the goal of arriving at the truth, or put another way, it’s the mutual exploration of “what is.”  Change evolves out of the synthesis of opposing viewpoints.  To even call it a conflict is a bit misleading; it’s simply a different approach to perceived differences. Out of that shared exploration comes insight and appreciation of one’s own, and each other’s, uniqueness. Learning to distinguish actual differences from subjective differences leads to an acceptance of actual differences and, consequently, more contact-ful relating.

“... and the recognition of similarities.”
~ Dick Price

It is worth noting that these two approaches have different underlying premises. The premise associated with a circular conflict is that it’s possible to be right or wrong about a particular interpretation of “what is.” The premise associated with a synthetic conflict is that the “truth” is the natural result of the exploration of “what is,” and because of that, its acceptance is ultimately ineluctable.  The former takes a position, staking a claim to authority and correctness.  The latter is more like a journey of discovery you share with someone.

Paradoxically, some of the most intractable conflicts really consist of the avoidance of conflict.  That is, people engage in the circular conflict as a way of avoiding the synthetic conflict. You probably can identify numerous such conflicts from the personal to the political level.

If you sweep something under the rug, that’s where it stays.  By ignoring differences and their attendant emotions you ensure a chronic state of circular conflict.  There is the vague hope that things will somehow work themselves out without you having to do anything, but rarely is that the case.  Usually, a conflict avoided is one that festers.

I’ve veered off into abstraction, and I had intended to be more pragmatic.  How can we go from conflict to contact?  How can we move from circular to synthetic conflict?  How can we make conflict the engine for the changes we’d like to see in our lives?

First, we can welcome conflict.  There’s no need to create it where it doesn’t exist!  But, when it does occur, if we have an attitude of curiosity and an expectation of learning something new, that will serve us well.  And we can learn to distinguish between contructive and destructive approaches to conflict, and to choose the former.

Second, we can learn to tolerate discomfort. The emotions that arise when we engage in conflict are often what I call the “less preferred” emotions: anger, fear and sadness.  More specifically, the sensations we experience tend to be identified as unpleasant.  By learning to tolerate, and even enjoy, intense sensation we enhance our ability to engage in conflict in a constructive way.  We learn to stay present even when our buttons are getting pushed.  By expanding the dynamic range of emotional expression we create more fluidity, which in turn leads to more “contact-ful” relationships.

Our goal isn’t to eliminate conflict.  Instead, it’s to re-frame how we think of conflict so that it becomes a constructive force in our lives, an opportunity for contact.  Circular conflicts can drag on for years.  A synthetic conflict in which two people fully engage is typically of short duration.   Let’s have more of the latter!

The workshops I lead offer a container in which to experiment with conflict, as well as tools to help distinguish our moment-to-moment experience — “what is” — from the stories and interpretations we make about it.

It’s an opportunity to connect with other playful people who are looking for more genuine contact in their lives. 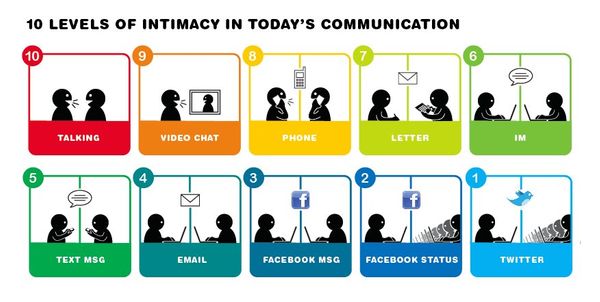 Texting is the primary way people screw up their relationships at the start. Why, and what to do about it?