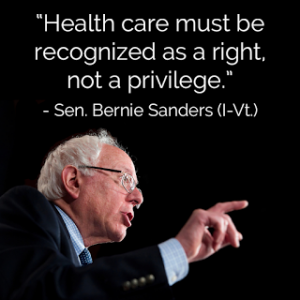 The more misleading attack ads that Hillary’s Super PAC runs, the more money Sanders has to refute them.   In systems theory it’s called a balancing feedback loop; it blunts the effect of the ads.

In addition, the attack ads contribute to two narratives.  First, they reinforce the already prevalent notion that Clinton is dishonest and untrustworthy.  She currently has a 51.9% “unfavorable” rating in national polls.  Second, they remind voters of one of Sanders’ central themes: the pernicious effect of money in politics.  Those are reinforcing feedback loops.  The more ads from Hillary that are perceived as misleading, the more “unfavorable” she becomes.

Together, these feedback loops probably mean misrepresenting the truth is a losing tactic for the Clinton campaign.  She ends up looking more dishonest, calling attention to that existing narrative about her, and the Sanders campaign has more money to counter the deception she is propagating.

If you are a Sanders supporter the logic is clear.  When Hillary’s super PAC runs a misleading ad:

These are two very simple, easy to accomplish things anyone can do.  If you are on the Bernie Sanders email list they even send out a donation link when these attacks occur.  A few people doing this is inconsequential, but more than a million people doing these simple things is unstoppable.  It’s a movement.

Now, on to the deception itself.  The Clintons (Hillary and her daughter Chelsea) are attacking Sanders on his single-payer healthcare initiative.  An analysis of the Chelsea statement is available at PolitiFact which rates it “mostly false.”   In addition, Clinton has misstated the cost of the Sanders plan, following the logic of the debunked Wall Street Journal analysis which calculated the substantial tax increases while ignoring the even more substantial savings of not having to pay private insurance premiums.
More info about the Hillary attack here.

It will be interesting how this plays out.  I think it’s going to backfire.

The point isn’t that the massive amounts of money corporations have donated to Hillary directly influenced her votes. You will not find that I ever changed a view or a vote because of any donation that I ever received. — Hillary Clinton

With Sanders posing a real threat in Iowa and New Hampshire, Clinton is now going on the offensive, attacking him for his voting record on guns. It’s a sign of desperation. Let’s keep things in perspective. The crucial choice in