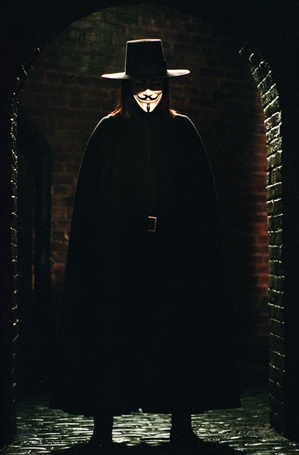 illainy or virtue? Context is everything. V for Vendetta, the recent release from the Wachowski brothers, provides a prism of meanings, where any particular meaning depends on the individual viewer’s reflection. Moral absolutists will find the ambiguity vexing. Tough. Here’s my take.

The film begins in 1605 with the story of Guy Fawkes’ attempt to blow up Parliament and assassinate the King. Quickly, though, it pole-vaults the present to land us in a dystopic London 20 years in the future. A totalitarian government keeps the population in place with intimidation, propaganda and omnipresent surveillance.

Sandwiched between 17th Century religious oppression and a familiar vision of a fascist future (Orwell’s 1984 and Nazi Germany are strongly evoked), the casual references to present-day events have the viewer shifting contexts. Seeing the ubiquitous surveillance cameras it’s easy to be reminded that London is the current leader in deployment of such devices with an estimated 400,000. Are the film’s futuristic audio surveillance vans all that far behind? The vitriolic TV pundit “The Voice of London” spews his jingoistic, homophobic tirades, and how can we not be reminded of a certain cable network bully? Allusions to the war “the United States started” can’t help but resonate with the current catastrophe in Iraq. These sparing references prevent us from slipping too complacently into what might otherwise be an entertaining futuristic fantasy, events happening in a galaxy comfortably “far, far away.”

V for Vendetta is a film about revolution. Certainly, the revolution of bombs and assassination, but also the personal revolution that is at the heart of all great revolutions and revolutionaries. Che Guevara said “The true revolutionary is guided by a great feeling of love.” And so it is with “V”, our hero, or anti-hero, if you prefer. Revolution is a matter of the heart, a passionate battle for truth, and fearsome defense of liberty, of love, of human dignity. In the nobility of that cause, what means do we allow ourselves? How far do we go before we sacrifice what we would succor? V is as merciless in his vendetta against the guilty as he is in the liberation of his young protégé, Evey, whose own internal revolution of love and freedom he induces. As Guevara also said, “the oppressor must be killed mercilessly…the revolutionary must become an efficient and selective killing machine.” V is exactly that— efficient and selective, a lover and a killer. What revolution of the soul must one suffer to become that?

The idea doesn’t sit well with my pacifist friends, steeped in Satyagraha. I wonder if the conditions that made nonviolent change possible in India, or in the Deep South, apply today. Is nonviolence universally applicable as a tool for change, or only effective at certain points in history? Does nonviolence not depend on the ability of the oppressor to feel shame? It finally worked with the British, but would it have worked with Pol Pot? Gandhi said “Love does not burn others, it burns itself. Therefore, a satyagrahi, i.e., a civil resister, will joyfully suffer even unto death.” Considered in that light, I wonder whether my friends will suffer even unto their deaths, or are effectively choosing hopeful complacency in the face of the long train of abuses and usurpations perpetrated by our nascent suzerain.

V for Vendetta throws a lighted match in our pool of political gasoline by asking how brutally people will allow themselves to be abused, for how long, and what means might they ethically use to put an end to their oppression. Any means necessary?

John F. Kennedy said, “Those who make peaceful change impossible make violent change inevitable.” A corollary might be that violence is also inevitable if good men simply do nothing. As we witness the steady erosion of our civil liberties, at what point do we actually do something, as opposed to merely nodding our heads politely at cocktail parties and murmuring that it’s indeed a deplorable situation? A revolution comes not from agreement but from action. It comes when enough people align their actions to that end, perhaps even seemingly insignificant actions. Why, one could even be part of a revolution inadvertently, by forwarding an email. In a networked age, receiving an email may be all it takes to be labelled a revolutionary — or a terrorist; and never truer the words of Benjamin Franklin on signing the Declaration of Independence, “We must all hang together, or assuredly we shall all hang separately.”

Hijacking a television broadcast, V sends the following message to the people of London:

There are of course those who do not want us to speak. I suspect even now, orders are being shouted into telephones, and men with guns will soon be on their way. Why? Because while the truncheon may be used in lieu of conversation, words will always retain their power. Words offer the means to meaning, and for those who will listen, the annunciation of truth. And the truth is, there is something terribly wrong with this country, isn’t there? Cruelty and injustice, intolerance, and depression. And where once you had the freedom to object, think, and speak as you saw fit, you now have sensors and systems of surveillence coercing your conformity and soliciting your submission. How did this happen? Who’s to blame? Well certainly there are those more responsible than others, and they will be held accountable, but again truth be told, if you’re looking for the guilty, you need only look into a mirror. We, ourselves, are responsible for the fact that something is terribly wrong with this country.

No truth could be more refreshingly inflammatory in our present political predicament, and no message more timely, because accepting responsibility for what is terribly wrong with this country is the necessary preliminary to setting things right. When sufficient numbers of Americans turn words into action no government can stand in their way. “People should not be afraid of their government,” V says, paraphrasing Thomas Jefferson, “Governments should be afraid of their people.”

You will no doubt have heard of Hugo Chávez’s speech last week before the United Nations. Much hyper-ventilating from right-wing media, and even the Democrats were quick to condemn his rhetorical flourish that W. was “the devil.” The reaction from